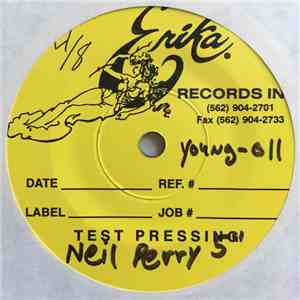 Test pressing numbered out of 8 with generic yellow/black Erika Records test pressing labels on them. Test pressings are 7" with a 5" pressing (1" of unpressed vinyl around outer edge).

This was to be young-011, a 5" picture disc, and we've had these yellow test pressings around for a long time and didn't know what to do with them. At first, we wanted to sell them to make back some of the $1100 lost since the record never came out. But, at long last, it makes more sense as a free fan club record collector's edition. No dis to the band intended, and if you want the real version of the record where these songs ended up, go to http://www.level-plane.com